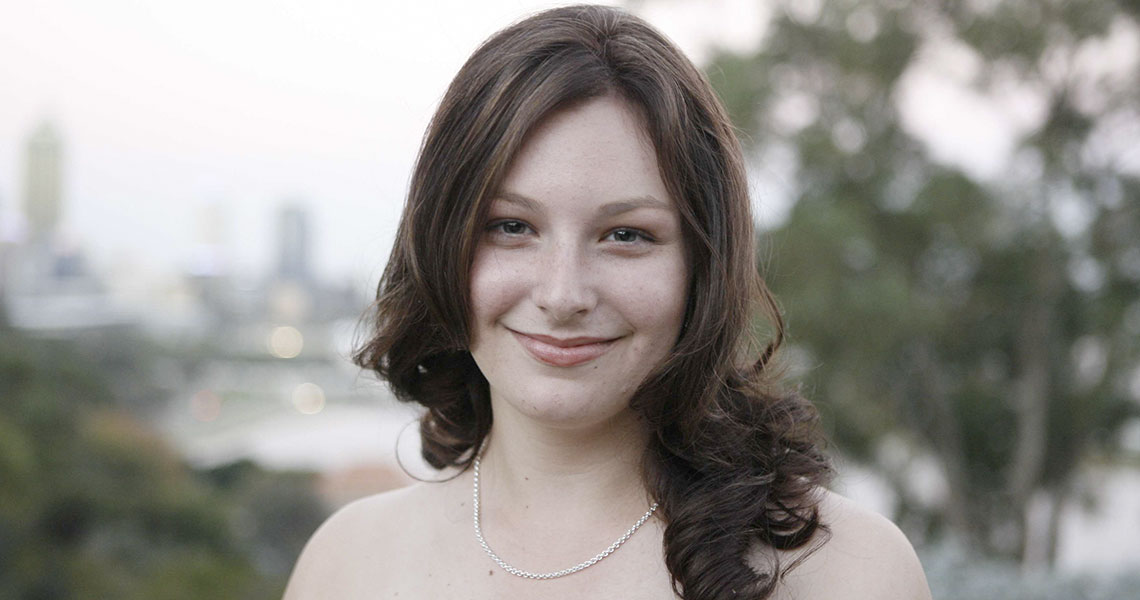 “The beginning of 2009 was the beginning of the next stage of my life. I had just graduated high school, had a job that I enjoyed, and I was just starting to taste the new-found freedom that a university degree offered. Not only that but the count-down to my 18th birthday was starting to get smaller and soon I would be able to go out and party with all my friends. And then all that was taken away from me, when I was diagnosed with Ewings Sarcoma on 18th May 2009.

Around Easter, I started to feel pain in the lower part of my back. I had previously felt this pain before, in the past few months, but only slightly and I was able to put it down to an active or stressful day previously. It never occurred to me to see a doctor to get it checked out. The Easter long-weekend led to a weekend of intense pain. After a couple of days, the pain just disappeared and so I just forgot about it, after all, had so much else going on in my life that I couldn’t afford to get sick or anything and nothing too bad ever happened to ‘people like me’. It only took another week for the pain to come back, but this time I didn’t even waste a second before going to see a doctor, the pain was that bad. After an X-ray and a follow-up CT scan I was told that I had a tumour in my left pelvis. Cancer had not even occurred to me in the entire lead up to this so it came as a massive shock.

I saw a surgeon the very next day who arranged the many tests including an MRI, PET scan and bone biopsy that would ultimately diagnose me with a rare and aggressive form of bone cancer, Ewing’s Sarcoma, at the age of 17. My primary tumour was in my left pelvis, but by the time we caught it, it had metastasised to the other side of my pelvis, my spine, ribs, lymph nodes and also to my lungs. When I was told, they couldn’t even tell me what type of cancer I had, just that it could be one of three different types. It didn’t feel real to me at all. People my age didn’t get cancer. I mean they couldn’t even tell me what type I had – surely that meant they could still be wrong? I went into shock, nothing sank in, but even if it did- or if I was able to take in what was being said it was in this medical mumbo jumbo that didn’t even sound English. Questions run through your head, but you don’t want to ask them because it makes it seem real. The doctor that I had at the time, told me to write any questions that I had down on paper when I was at home and could think of them and then bring that piece of paper to my next appointment. It would help to organise my thoughts. I even went back to uni, after being diagnosed, and sitting through my lectures it felt like nothing was different.

Afterwards, however, with even more appointments, blood tests, a PET scan and the first of many days of chemo to come, all within a week, it started to sink in. Suddenly I had to replace uni lectures and tutorials with doctors appointments, hanging out with friends for spending time with nurses in hospital and instead of going to work I went to chemo. I was sentenced to 8 months of chemo, including 2 months of radiation therapy as well.

I went through 8 months of chemotherapy at an outpatient’s day suite, and 2 of those months also involved radiation therapy, both of which were at adult hospitals, because I was past the age of being treated at a children’s hospital. Everyone I met during treatment; nurses, doctors, specialists and even the other patients were extremely helpful and friendly, but because of the age difference between me and most of the other patients, it was quite a lonely time.

Being diagnosed with cancer takes all the control and choice out of your life: you can be treated like a kid who doesn’t understand anything, and can feel this horrible sphere of isolation. You are suddenly stuck getting treatment, having nurses doing everything for you and the decisions that you made just a few months ago, like ‘what should I do today?’ are taken out of your hands completely. But I had access to an amazing medical team. I was diagnosed at the age of 17, a child under the eyes of the law but I was taken seriously by my doctor and treated like an adult. Any information he had he directed it to me, not to my parents. Teenagers really do understand more of what is going on than many people give them credit for and we have a right to know what is happening. That is why when my doctor gave ME the choice when he could, I really appreciated it.
There is a lot of isolation when you are living with cancer. Sure, you are surrounded by nurses, doctors, friends and family but you still feel alone. Friends, especially, through no fault of their own, often don’t know how to act. They don’t know what to say for fear of saying the wrong thing and sometimes to avoid that uncertainty – they just avoid you. They weren’t to know that there really is no ‘right’ or ‘wrong’ thing to say, but just being there for me as a friend and being ‘normal’ was all it took.

3 months into my treatment, through a stroke of luck, I met another young person on the ward (a nurse suggested that we meet seeing as we were a similar age and both had sarcomas) and that was the first time I met another young person going through a similar thing. It was unbelievable how much that helped me realise I wasn’t alone, and I was not the only one who had to go through these things.
I couldn’t help but think that I stood out with my friends because I was the one who had ‘cancer’, but when I went to hospital I was the one that stood out because I was the ‘young’ teenager being treated. Joining CanTeen provided me with an opportunity chance to fit in and just be normal again. It became a place that I could just be myself and I could talk to people who understood and didn’t treat me any differently, and because of that I no longer felt that I was ‘the girl with cancer’.

Spending almost 24/7 facing hospitals, treatments, side effects and whatnot, just being treated as ‘normal’ even for a few hours, and being able to talk about movies, latest celeb gossip or music felt like the best medicine. Along the way, I got to try so many new things I had never done before and most importantly met some amazing people and made some lifelong friendships. The flexibility meant that even though I was in treatment, I could still participate in some activities and meet other people along the way, something that helped make me feel that my life could, and would, get back to normal!

I went into remission at the beginning of January 2010, and my life was looking like it was back on track again. At the end of August 2010, six days before I was due to go to Paris for a week thanks to the Make a Wish Foundation, I found out that I had relapsed. This time it had gotten back into my bones as well as my lungs and liver. As I had been treated with chemo recently, the best course of treatment I could have was to try a new trial drug that had only just come over from Perth from Melbourne. Because there was still paperwork to be filled out, it meant I could go on holiday and upon my return to Australia, start my treatment. The trial was looking at blocking an insulin growth receptor that was involved in the growth of Ewing’s Sarcoma and was only in its first stage of patient testing. Once I started the trial, I started to get very nauseous and was in a lot of pain. After being admitted into hospital it was found that I had a tumour growing in my skull and that what was making me so sick. I had 25 days of radiation therapy to my head alongside being on the trial. The radiation cleared my head, but after only 57 days of being on the trial, we found out that it wasn’t working.

I was then due to go onto chemotherapy as enough time had passed to make it more effective but it was discovered that the cancer cells had gotten into my bone marrow and was attacking and killing my platelets. As I couldn’t go on any IV chemo with such a low platelet count, I was put on mild chemo with the intention of cleaning out my bone marrow in preparation for the IV chemo. The mild chemo, however, responded so well that it started to attack all the cancer in my body and I was once again on my way to recovery.” 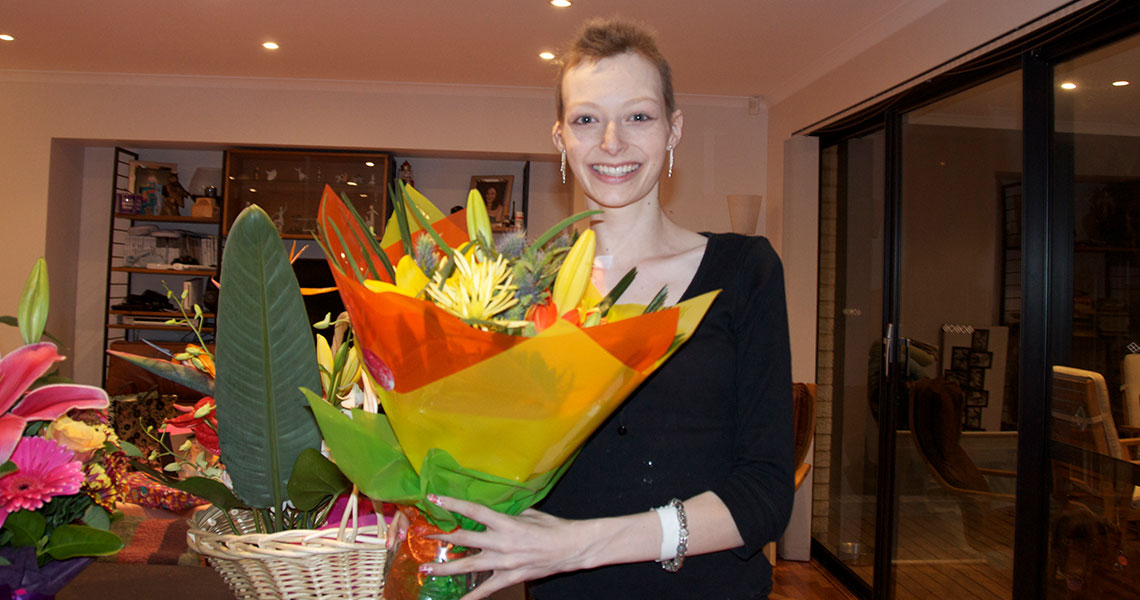 Throughout her life, Abbie looked to help others and she had intended her future to be in forensic psychology. Her change in personal circumstances led her to channel her passion for making a difference into advocacy for those diagnosed with cancer, particularly in her age group, leading her to become a TeenLinker for CanTeen; a representative on CanTeen Sub-Committees; a member on a Patient Consult group for ways to improve survival rates in the Adolescent and Young Adult age group; becoming involved in YouCan, a project collecting old mobiles phones to be recycled by the Sony Foundation to raise funds for Adolescent and Young Adult treatment centres; speaking to medical students about appropriate treatment of Adolescent and Young Adult cancer patients and developing her own fundraising ideas to increase awareness about sarcoma in the community and to fund sarcoma research: a cause in which she passionately believed. Many of these activities she undertook whilst having treatment. Sadly, the improvement in her health was not to last long and after three months of mild chemo, the cancer cells reinvigorated and she became very unwell. However this did not stop her passion for wanting to help others in the future who were to be diagnosed with sarcoma and she channelled what energy she had left between having as much fun as possible and developing her plans for Sock it to Sarcoma!, to improve sarcoma awareness and research into sarcoma. She said: “It can’t help me, but it can help someone else. What happened to me was for a reason; maybe this is the reason?” Three days before her 20th birthday, it became clear that Abbie did not have a lot of time left and she spent the last three weeks of her life at home with the people she cared about most and who loved her. She passed away peacefully and with dignity at home on August 24th, surrounded by her loved ones, her radiant smile and sense of humour always present; an inspiration to all who knew her and watched the way in which she dealt with what life had thrown at her: with grace, endless courage and determination that something positive must come out of her personal experience.